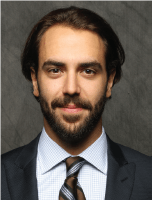 For the past 10 years I have had the opportunity to follow my passion of training goaltenders of all ages and skill level. My playing career included Junior A with the Yorkton Terriers of the SJHL, winning a league championship and having the chance to play in the Royal Bank Cup. Following my final season I was approached by Brady Robinson (Philadelphia Flyers Development Goalie Coach) to work as the assistant manager of the BC region for the Goaltender Development Institute, which was owned by Ian Clark (Vancouver Canucks Goalie Coach). After seven years of working with Brady he decided to take on a full-time role with Vaughn and I have since started my own goaltending company, LSGC Goaltending (Lynden Sammartino Goaltending Consulting) and in 2015 I was hired on as the Goaltending Development Coach for the Victoria Royals (WHL) as well as the UBC Men’s Hockey Team in 2018.

Goaltenders need to adapt to a game that has become faster and more dynamic. Players are now more skilled than ever. I recognize that every goaltender is different and I don’t expect them all to play the same style but building a strong foundation is critical. You have to find what their strengths are and build on them while rounding out their weaknesses. I believe that over the past decade goaltenders have become overly robotic in the way they operate. Reads/anticipation (”goalie sense”), and the ability to mentally handle the pressures of consistency have to be key focuses in every goaltenders development. Instincts and athleticism have become secondary. Goaltenders need to achieve a healthy balance of using simplified save processes and proper trajectory tactics/center shifts to allow them to maximize their net presence. If they can combine this with the proper timing/use of athleticism and compete, it’ll allow them to make timely saves. A goalies ability to decide between plan A (simplified save process) or plan B (athleticism) in a split second will give them success in the new age hockey.