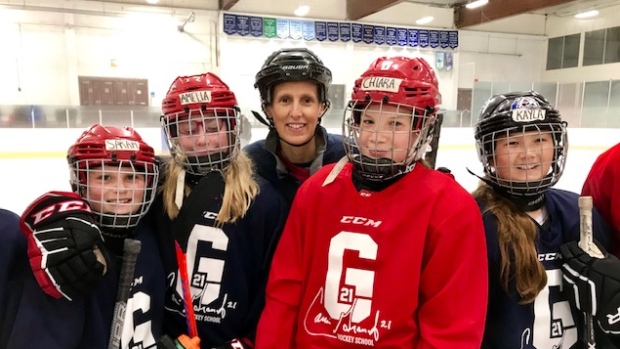 A hockey legend is teaching kids on and off the ice.

The Cammi Granato Hockey School at the North Shore Winter Club is a hockey camp focused on learning fundamental skills in hockey and building confidence for the female hockey players attending.

“The girls have been great, I can see them coming out of their shell every day. They’re smiling, they are working hard and they seem to be really enjoying it,” said Granato-Ferraro.

One of those girls is 10-year-old Rhea, who said, “I’ve learned new skills from Coach Cammi and excited to use them in a game.”

This is the first year for the camp, but American born Granato-Ferraro has some history teaching hockey in the U.S. The decorated hockey star formed a camp in Chicago back in 1998, fresh off the U.S. Women’s Hockey gold medal victory in Nagano, Japan.

“I used to come into the rink and people would think I was carrying my brother’s hockey bag,” Granato-Ferraro told CTV News Thursday. “After the ’98 Olympics, the girls would come in droves and it showed that there was a huge enthusiasm for what we had done in Japan when we won the gold medal. There were so many girls that really wanted to take that path and now had dreams to play collegiate and Olympic hockey.”

Hockey has been a huge part of Granato-Ferraro’s life. Raised within a family of hockey players including older brother Tony who played in the NHL, she grew to love the sport and was determined to reach her goals.

“Five siblings — everyone played a role in helping me become who I was, not only as a hockey player but a teammate and a person,” said Granato-Ferraro.

She retired from the game in 2005, but before that she led the U.S. Women’s Hockey Team, which played in nine world championships games but only won gold in 2005. She became one of the first women to be inducted into the Hockey Hall of Fame in 2010.

But, it’s the dream of the Olympics that motivated the hockey super star.

“Getting to the Olympics was always a dream for me, ever since I was little watching the 1980 team. I’m dating myself. The 1980 men’s Olympic U.S. team won the miracle on ice. That was a big inspiration,” said Granato-Ferraro.

Today, she is married to former NHL player and broadcaster Ray Ferraro and raising their sons in Vancouver. She hopes the hockey camp will be an annual event in the summer.

“I’ve learned to have fun, not just on the ice but with my team outside of the ice, like the team building,” said 12-year-old Heather.

“I’m happy I can do my part here to try to grow it and inspire some of the kids to have those goals and dreams, because there are some really good hockey players here and they can take it to where they want to,” concluded Granato-Ferraro.

Along with Granato-Ferraro, top NCAA and U sports coaches will instruct the kids. The camp continues until Aug. 16 at the North Shore Winter Club.