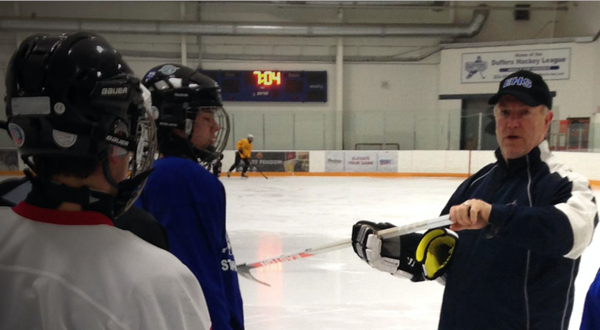 The off season is an interesting time for a hockey coach. We’re relieved another long season is over, but we’re antsy because we don’t have a consistent outlet for all the amazing ideas you wished you’d thought of during that horrendous 8 game losing streak in November.

This basically describes every day for Ron Johnson, minus the losing streak. Ron is constantly looking for new ways to re-invent the game when it comes to skill development. During my talk with him a couple weeks ago he described his thought process and how the resources he uses to invent skill implements used by hockey coaches.

Kelvin: A lot of coaches coach with their gut. Or their heart. You approach coaching from a research base to gather as much information as possible while you’re creating your inventions.

Ron: I track every single goal in the NHL. I track the rate of occurrence of skill, I track how goals are scored, what skills players use, the causes of the goals. I have an analytical side as well so I have some players who work for me and we track data and I’ve been doing that now for 10 years. The NHL clients I work with like Ryan Kesler and Patrick Marleau, I provide them with advanced scouting reports on where to shoot on goaltenders, offensive tactics in certain areas of the ice that may become available more often than not, and playing the percentages. Most of the stuff I use is based on information used for developmental purposes over the summer because I work with a lot of first-rounders in the NHL. I run about six NHL pro camps over the course of the summer around the United States and Canada. I work with different agencies that expect me to have the latest information. The players want to know what the trends are and where is the game going.

You’re coaching minor hockey again at the North Shore Winter Club, do you coach with the same amount of detail as you would if you were working with a pro player?

There’s nowhere you can go where you get the full scope of the skills necessary to actually play this game. There’s a lot of separation in the industry where you have people that teach skating but have never shot a puck very well, you get people that shoot pucks but have never done power skating and you’ve got people who are stick handling experts but don’t know skating really well or shooting. In other countries such as Finland and Sweden, they tend to have coaching centres where everybody gets together once a year for the betterment of the hockey industry and they have international seminars and put together ideas to try and make everybody better. Skills in the game are always changing, so I think it’s important to build upon each separate skill.

For instance, a lot of the skating skills have changed. I started a research company in 1999 researching skating around the world and I did over twenty thousand tests myself. I travelled to Germany, we did teams, we tested teams from Korea, Japan, all over the world. One of the most important skating skills is generating offence.

I took those ideas to my Bantam team and just focused on the skating skills that made the difference, and the other skills that made the difference, and then I won a national championship with that research project. And in 2005, I started another company that we co-founded with Mike Bailey, who was the goalie coach from the Dallas Stars, he’s now retired from that, but him and I started a company called “Next Testing” and we researched all of the other fundamentals, the physiology, I worked with the University of Pittsburgh Medical Centre, I worked with some of the top professors and the idea was to find out more about the biometrics, the physiological skills, and how it impacted skating performance.

When I look at the kids today, the scope and language of the game has evolved to describe so many different parts of the game.

What are you working on now? Are you researching anything new?

I’m researching rate of occurrence of fundamentals, such as where the skating fundamental rate of occurrences, breaking those fundamentals into categories for developmental purposes so kids have a better understanding of when they work on explosive skating or deceptive skating or evasive skating. We’re coming up with different language. We look at, it’s too many things to look at, there’s eighty data fillings to cover, it’s a very, very in-depth process. We look at tendencies that occur. You’ll notice something that has happened once and then all of a sudden it will happen twice, and now it will happen 15 times because the social media says that it gives you something. The highlights that every player in the NHL will see something and then they’ll try it later on so there seems to be a faster learning curve because of social media and video today.

It’s a highlight league now. As a coach you can teach those skills but it’s probably a lot harder to find evidence of systems play and things like that.

Take a look at cycling. Cycling has gone from a forward cycle to a deep zone cycle to a point cycle. They’re engaged at the point, the defensemen will activate, there’s a lot of different tactics. A lot of guys are bigger and stronger, so a lot of games are won by winning a wall battle, and knowing where the puck is going because there’s such predictability in the defensive systems.

Well, you can’t defend creativity. Guys can look around but it’s all vision. Basically, it’s called the vision wars. If you can’t pay attention to detail on the ice, then you’re going to get caught because the skill level of players is so high right now. So it’s the observational skills that really are lacking in today’s game. Even in development, we don’t do it. We just focus too much on focal stuff like skating skills, we don’t work enough on the actual visual system that’s necessary to have these players develop their real hockey IQ.

Kids ask me, “well what do you mean there’s four hockey IQ’s”? I explain that to a lot of the pro players I work with, you might have a very good goal scoring IQ but you have a poor play making IQ. Or vice versa, you have a good play making IQ but you have a poor goal scoring IQ. Or a defensive player, your primary defensive IQ is great but you have to cover the guy with the puck. So if you don’t know how to angle him properly or control him properly or contain him properly, that’s primary IQ. Then you have the guy away from the play who’s covering the possible back door pass and focusing on how those lanes have to be blocked.

The game is becoming more diverse. If we don’t have it that way, then it’s really hard to isolate why players are more exceptional than others. And that’s what we have to focus on.

Stay tuned for more from Ron Johnson. Coming up:

“If you criticize every single mistake you wouldn’t have anybody playing hockey because nobody would put their gear on. What we have to do is criticize repetitive mistakes but let kids make mistakes because that way they enjoy a sense of adventure. That’s passion. That’s the passion of the game, to keep learning.”