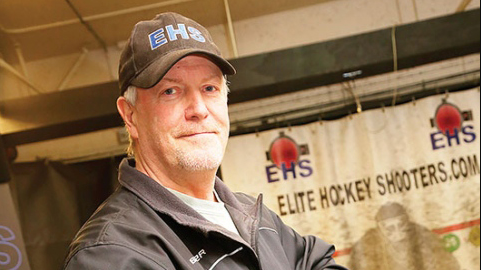 One of the first impressions I got of Ron Johnson, the North Shore Winter Club’s Bantam AAA Coach, was his passion for making his players better. And that could be Patrick Marleau of the Toronto Maple Leafs or an 8 year old just embarking on his or her hockey journey.

Because for Ron, it doesn’t matter who you are. At the end of the day, what matters is the effort you put into your craft.

Today is the first in a series of interviews with Ron to talk about hockey, his career as a coach, and the new advantages technology is providing for young hockey players.

Kelvin: You’re a busy guy Ron. Tell me what you’re currently working on.

Ron: I’m currently working on inventing training aids for the NHL. I just got a shipment that I have to send out this morning so I’m just at my training centre where I have them stored and getting them ready to send out.

Kelvin: Wow, an inventor. How did you get into inventing stuff for hockey?

Ron: Well, it happened because of all the NHL guys I work with. The guys asked me to come up with training aids that would help them with their on-ice training. I work on offensive tactics so I’m an offensive consultant for a lot of players in the NHL. I came up with a training aid that allows them to practice shooting through screens. They put them in front of goaltenders and the guys come in and shoot through them. They act as players that block the shots. The players will talk to me to say what do I have or what ideas do I have for training aids that will help them become better offensive players so I put on my inventor’s hat and go to work. I’ve done welding before and fabrications so I come up with some ideas and then I send them out to get built.

We’ve all coached the shin pad assassins. An aid like you’re describing is for everybody, not just the forwards. We always tell our D-men to just get the shot past the first guy. Without having a hockey background you wouldn’t really be able to come up with ideas like that. Take me through some of the benefits – I’m sure that’s not something that happened over night so how did you get into coaching as well as inventing these coaching aids?

Ron: I’m originally from northern British Columbia and I moved down here when I was 19 and I got a job in the local ice rink. I had worked at an ice rink up north, that’s kind of what you do. You either work in a mill, or you work in an ice rink. We moved down here. I had played senior A hockey and someone saw me play and asked if I wanted to get into coaching. I took over a minor hockey team when I was 19 and I have been coaching ever since. From there, I won a Bantam National Championship in 1999, we went all the way to the Nationals and won the championship for Western Canadians. From there, I got a job coaching junior and I coached junior hockey for the next 18 years, and during that time, I was completing my research. I did research on my Bachelor of Science degree and then I did my Masters of Science degree in biomechanics. I completed that in 2011 and then from there, I had worked with a couple agents that asked me to train some of their players and then one thing led to another and then it’s word of mouth and I’ve worked now probably with about 40, 50 NHL players since then as a consultant and as a skills coach.

When I worked for the Corporation of Delta, I was involved in maintenance and was into welding so I used to have some downtime sometimes and days off, I would go in and work on some inventions or just plug along and do things, that’s how it started.

You know necessity is the mother of invention so you come up with an idea, guys like it and so there’s two ideas and a couple more in the works and away we go.

Awesome. I’m going to write down some ideas for stuff I need and I’ll send them your way. You probably get coaches telling you all the time, “hey, can you create something that will help us do A or B and go from there”. Does that happen ever?

Yeah it does. Most of it is have reactionary training devices I’ve designed and send off to manufacturing facilities to have them built for me, and then we try them out, patent them and away we go. I’ve got quite a few inventions, it’s just trying to make kids better. I’ll give them tools they can use to become better hockey players and have a lot of fun while they’re at it.

You’ve worked with players from the North Shore Winter Club before, but it’s been a couple years since you were coaching minor hockey, right?

My co-coach, Terry Morrison, was asked to get involved in coaching this year, then he talked to me, and I talked to Bob and we just kind of went forward. This is my first foray back into amateur hockey since 2000, 1999 I guess it is. So I haven’t coached minor hockey since then, only from a skills perspective, not from a team perspective. Obviously it’s spring hockey as well, I’ve been coaching spring hockey for anywhere between 10 to 15 year olds, so that’s kind of the same thing but you know, winter hockey is a little bit different.

So what are you looking forward to in the second half of the season back in minor hockey?

Basically fixing some of the problems that I see in sports in general. I think there seems to be a cognitive dysfunction. The players aren’t as aware as they used to be. Maybe it’s too much gaming, maybe too much social media and doing other things. Whether they’re too focally attentive, vision on the ice is poor, I really noticed the degradation in that. I think players in some senses have better individual skills, they tend to skate better overall, and have better hands overall but their decision making on the ice is very poor. And their ability to see the ice is very poor. And that’s more a product of our environment. That’s the research I’ve been doing over the last twenty years, tracking cognitive dysfunction because I track all the goals in the NHL, look at awareness issues and why our players are getting open and they shouldn’t be getting open. You know, it seems to be on the up, most of the decision errors that are made by players now are just a lack of awareness, not the skill, but lack of awareness on the defensive side.

Next up in part 2 of my interview with Ron:

“There’s a lot of passionate coaches, but I really try to approach coaching from a research base, to get as much information as possible before. The kids probably have no idea how much has gone into each decision they make.”